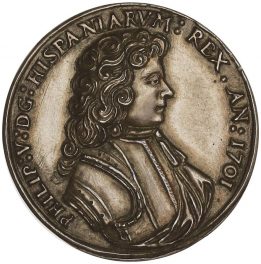 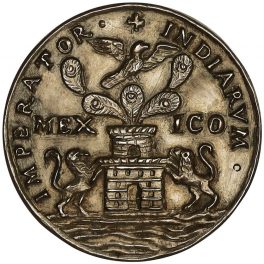 This medal was created upon the proclamation of Philip V as the ruler of Mexico. Obverse pictures Philip, in full armor his hair flowing down his back. Around his head is his title, Philip V, by the grace of God, King of Spain; 1701.” Reverse, a castle is centered in the middle in waves, held up by two lions, which allude to Castile and Leon. The castle supports an eagle seated on a cactus. Around the scene is written “Emperor of the Indies; Mexico” which refers to Spanish possessions in the Indies. The image is referred to as the Arms of Mexico, while the lions and the castle were the main elements for the Arms of Mexico City. The image of the eagle of the cactus recalls back to the founders of the Mexico City who predicted that the where an eagle sits on a cactus is where the city must be built.