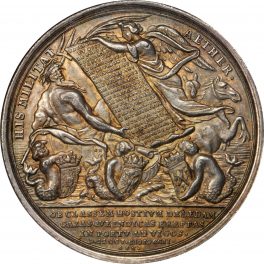 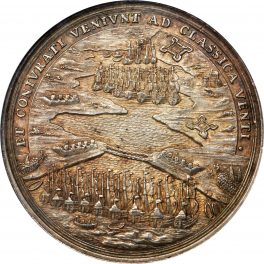 Designed by George Friederick Nurnberger, George Hautsch, and Martin Brunner, this medal commemorates the British, German, and Dutch victory over the Spanish at the port of Vigo. Obverse, Neptune on the left drives to the sea, in his hand is a list of captured Spanish galleons, and notated whether they were burnt, (inc”) sunk, (sv) or captured (occ). Three Nereids hold the crowned shields of the victors. Around the scene is written, Heaven fights for these. For the fleet of the enemy destroyed and the wealth of the Indies captured in the harbor at Vigo, October 22nd.” Reverse, is an aerial image of the Vigo fort. Nine ships line up to attack the vessels in the harbor; the only thing between the attacking ships is a fort and a double chain. Around the image is written, “And the confederate winds come to the call of the fleet”. This detailed medal commemorates the British and Dutch victory in what was supposedly a safe port for the Spanish and French ships.