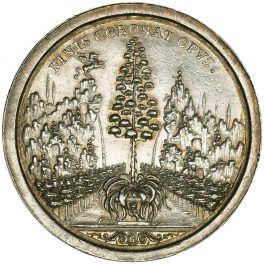 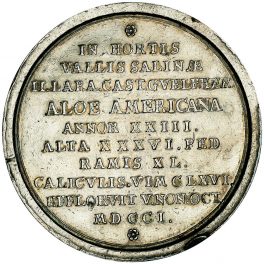 Centrally placed on the medal is the tall aloe plant, surrounded by a double row of shrubbery, water, and steep cliffs that feature Pegasus and Apollo on the edge. Compared to other medals featuring horticulture, this medal maintains a clearer perspective of the garden, complete with a vanishing point. Around the scene is written “The end crowns the work” and in exergue, a “G” is written on a scroll. Written on the reverse is “The American Aloe [or Century Plant] of twenty-three years, in the gardens of Salzdal, two miles from the Castle of Wolfenbuttel; height thirty-sox feet, forty branches, bloomed with six thousand one hundred and six-six flowers, on the fifth day before the nones [i.e. the third] of October, 1701.”