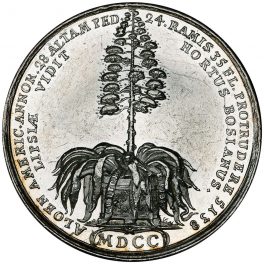 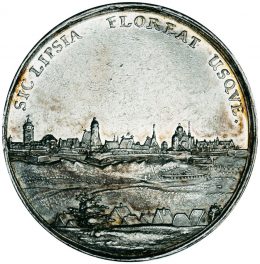 This medal focuses on the extraordinarily tall aloe plant located at Leipsic in 1700. Obverse depicts an image of the plant. The Latin encircling the aloe translates ” The Bosian Garden at Leipsic in 1700 saw the American Aloe of twenty-eight years reach a height of twenty-four feet, with thirty-five branches, and blossom with five thousand and one hundred and thirty-eight flower”. Two of the leaves of the plants bears initials, “Cultore E: Pein” for the gardener, Elias Pein. Reverse displays the town of Leipsic, encircled by the Latin, “So may Leipsic ever flourish”. The town, surrounded by a wall, is at the back of the medal, which also features large fields and a small village in the forefront of the medal.