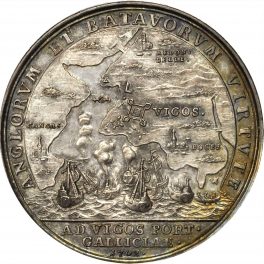 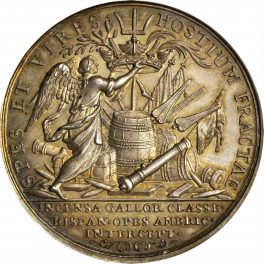 This medal celebrates the British victory at Vigo in 1702. Obverse of the medal features Victory, putting a crown on the trophies captured from the Spanish. Trophies such as bales of merchandise, barrels, flags, and a canon are displayed. Latin around the edge of the medal translates “The hope and strength of the enemy broken. The French fleet burnt, and the American treasures of Spain intercepted.” Reverse features the fleet sailing to Vigo Bay. Behind the fleet is a map displaying various Spanish ports. The Latin around the medal translates to “By the valor of the English and Dutch! At Vigo Bay, in Spain, 1702”