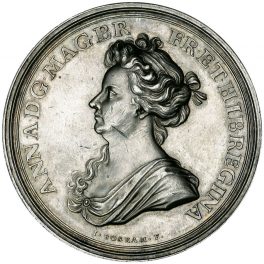 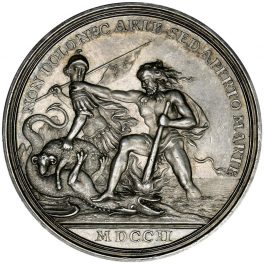 This medal commemorates the British, German, and Dutch victory over the Spanish at the port of Vigo. Obverse displays a bust of Queen Anne, her hair piled up on her head with a lovelock over her shoulder. Unlike other Vigo Bay commemorative medals, she wears a crown and the shoulder of her dress is fasted at the front with a broach. Around her head is her Latin title, “Anna, by the grace of God, Queen of Great Britain, France and Ireland.” Reverse displays Hercules, stepping onto the throat of a dragon and stops a soldier carrying off the Golden Fleece. The leader of the British forces, Sir George Rooke, is meant to be Hercules, and the soldier with the Golden Fleece is interpreted to be French. The success of this naval battle ensured that the French forces would not recover during this conflict, thereby making this victory the most important gained thus far.