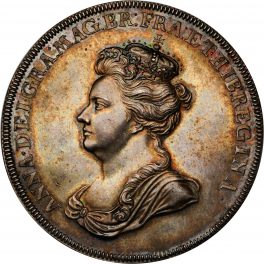 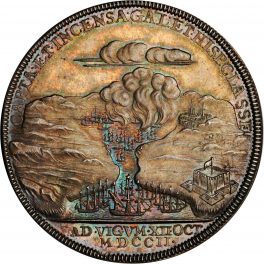 This medal commemorates the British, German, and Dutch victory over the Spanish at the port of Vigo. Obverse displays a bust of Queen Anne, her hair piled up on her head with a lovelock over her shoulder. Unlike other Vigo Bay commemorative medals, she wears a crown and the shoulder of her dress is fasted at the front with a broach. Around her head is her Latin title, “Anna, by the grace of God, Queen of Great Britain, France and Ireland.” Some of these medals have a slight difference in the Latin over Anne’s head; whereas some have “Fr” others have “Fra” based on differences in the dies. Reverse displays an aerial view of the naval battle, with smoke rising in the distance. Around the scene is written, “The French and Spanish fleets taken and burnt” and in exergue, “At Vigo, Oct 12, 1702”.