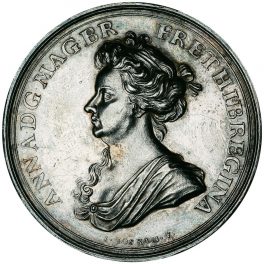 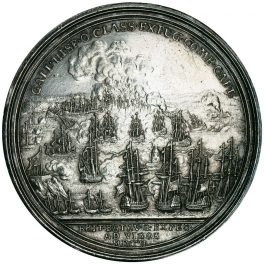 This medal commemorates the British, German, and Dutch victory over the Spanish at the port of Vigo. Obverse displays a bust of Queen Anne, her hair piled up on her head with a lovelock over her shoulder. She does not wear a crown. Around her head is her Latin title, “Anna, by the grace of God, Queen of Great Britain, France and Ireland.” Below the image is the artist’s signature, L. G. L. for Lazarus Gottlieb Laufer. Reverse displays an aerial view of the naval battle. Smoke rises in the background. Around the scene is written, “By the bravery of the English and Dutch” and in exergue, “The fleet burned, and American treasure captured 1702”.