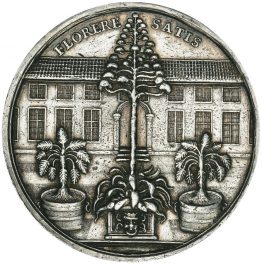 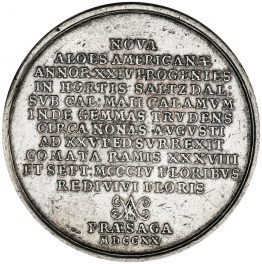 Obverse, this medal displays an American aloe plant as it blooms in a box. On either side are two small plants and behind the aloe is a long building that stretches across the medal. The top of the medal displays, “To bloom [or flower out] is sufficient”. Reverse displays lines of Latin that translates to “The new offspring of the American Aloe in the garden of Salzdal, in its twenty-fourth year, put out a spike about the Calends [the 1st] of May; then issuing buds about the Nones [5th] of August, it rose to the height of twenty-five feet, crowned with thirty-eight branches and adorned with one thousand, three hundred and four flowers. The presage of a reviving flower”. This Latin inscription is followed by the initials “A.W” in monogram, possibly referring to Augustus Willhelm, Duke of Brunswick-Wolfenbuttel.