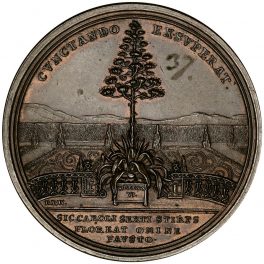 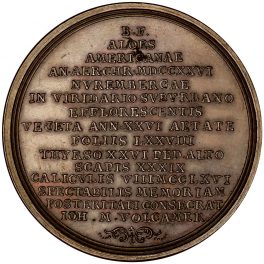 This medal compares the blossoming of the agave plant to the thriving daughters of Charles VI of Germany (Hapsburg). Issued in 1726, thirteen years after the Pragmatic Sanction of 1713 where Charles VI abolished male-only succession, this medal proclaims on the front “It succeeds by delaying. So by this happy omen may the race of Charles the Sixth flourish.” The Agave blooms in the center of the medal, surrounded by a hedge with mountains and hills in the background. Bottom of the medal displays the artist’s signature, P.P.W. for Peter Paul Werner. Reverse is translated “Freely rendered, the plant of the American Aloe in the year 1726 of the Christian era, blooming in the suburban garden of Nuremberg, in the twenty-sixth year of its age, with seventy-eight leaves, a spike of twenty-six feet in height with thirty-nine branches and eight thousand two hundred and sixty-six flowers. John M. Volcamer strikes this [literally consecrates] for posterity in memory of its beauty.”

Company of the Indies Medal