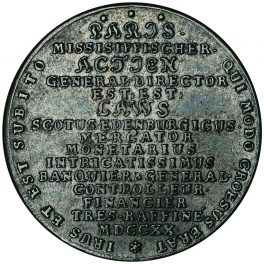 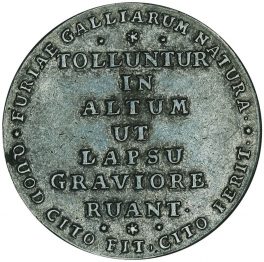 John Law, a promoter of questionable speculative enterprises in the Americans for the French, is negatively depicted in this medal. The medal, unlike the other John Law medals, does not display an image of Law, but rather both sides are covered in text. The front of the medal states, “He who but now was [the wealthy] Croesus, is [the beggar] Irus, and that suddenly. Laws is the Manager-General of the stock of the Mississippi Company, of Paris, he is; the Edinboro’ Scotchman, the merchant, the capitalist, the most skillful banker and Comptroller-General, and an extremely acute financier, 1720.” Reverse displays, “Madness is the natural characteristic of the French: Whatever is made quickly perishes quickly. They are raised up on high that they may be destroyed by a greater fall.”