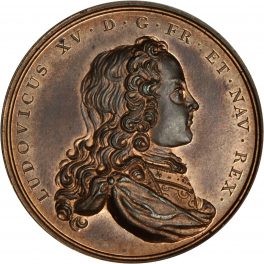 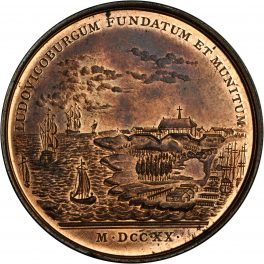 This medal depicts Louis XV as a youth, draped, facing to the right. Around his head is his Latin title, “Louis XV, by the grace of God, King of France and Navarre”. Under the bust is the art’s name, “I. Le. Blanc F.” Reverse, displays the fort of Louisburg. The large building to the right of the center displays a cross and around it are several small houses. To the left there is a body of water with five ships sailing along the shoreline. Several ships are in the harbor at the wharf, which is next to several warehouses. Between the wharf and the fort is a small forest next to a small lake. Around the image translates, “Louisburg founded and fortified. 1720.”