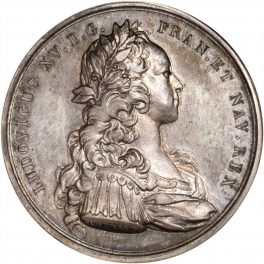 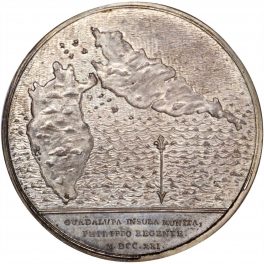 This medal focuses on the fortification of the Caribbean island of Guadeloupe, which the French overtook in the seventeenth century. After the French seized the island, there were several battles with the British over the land, which resulted in the death of many natives. This medal depicts Louis XV as a youth, wearing armor and a laurel crown, facing to the right. Around his head is his Latin title, “Louis, XV, by the grace of God King of France and Navarre”. Under the bust is the art’s name, “Du Vivier F.” Reverse, displays two large and twelve small islands. Near the center a dart with the end of a fleur-de-lis, points down at the exergue, upon which is written, “Guadeloupe fortified in 1721, Philip, Regent.”