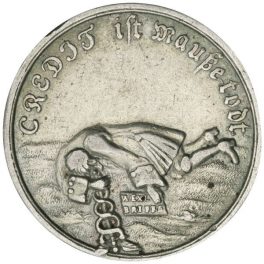 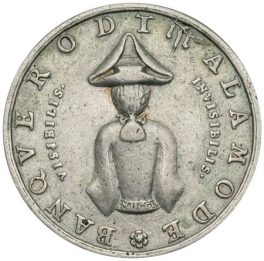 John Law, a promoter of questionable speculative enterprises in the Americans for the French, is negatively depicted in this medal. Obverse pictures a man, dead on the ground with his letters of exchange in his left hand and a caduceus in his right. The motto surrounding the image states “Credit is as dead as a rat”. Near the rocks is written inaccurately “MDCCI” instead of “MDCCXX”. Reverse pictures the half-length figure of John Law, his back to the observer. He wears a cocked, tri-corn hat. Around the figure is written, “Bankruptcy is the fashion”. Between the outer words is written “Visible, Invisible”.