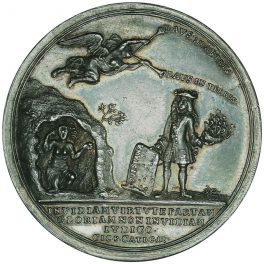 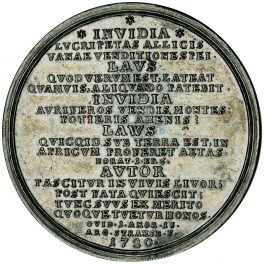 John Law, a promoter of speculative enterprises in the Americans for the French, is depicted in court dress complete with a hat and wig and holding in his right hand a scroll or a lottery ticket. In his left hand is a ship. To the left is a cave with Envy in the mouth of the entrance. Above their heads flies Fame and from her trumpets comes a translation of “The envy which is born of virtue, I consider to be glory, not envy. Cicero’s First Oration against the Praetor Catiline, Chapter 12.” Reverse depicts a conversation between Envy and Law, which translates “Envy: âYou entice those who seek wealth by the sale of a worthless hope.’ Law: âThat which is true, although concealed, will sometime be disclosed.’ Envy: âYou offer for sale gold-bearing mountains; you possess nothing but brass.’ Law: âWhatever is under the earth, time will bring to light.’ Horace, Epistles, I. 6 Author: âMalice feeds on the living; after death, it rests. Then every one will receive honor according to his deserts.’ Ovid, Art. Amor. I: 15 Made at Strassburg, in Silver, 1720.”

1723 Company of the Indies Medal