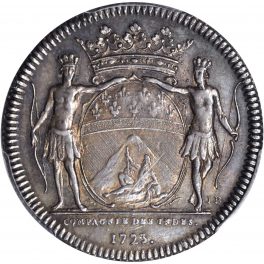 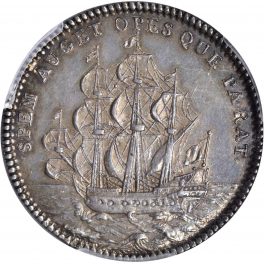 History, Information, and Value of 1723 Company of the Indies Medal

Value of 1723 Company of the Indies Medal

This medal was created by the Company of the Indies, which was a company formed by Letters Patent in 1664 and granted by Louis XIV the right to trade all over the Americas and African coast. Obverse of the medal features a shield that depicts a river god sitting and leaning on the Horn of Plenty while holding a paddle in his right hand. The top of the shield features nine fleurs-de-lis. The shield is crowned and held up by two natives, holding bows. Reverse of the medal displays a ship under full sail, sailing to the left around which is written “It increases hope and prepares wealth.”

Company of the Indies Medal