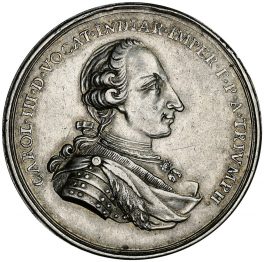 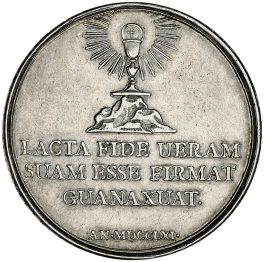 Value of 1760 Proclamation over Gunaxuato Medal

This medal proclaims Charles III as ruler over Guanaxuato. Obverse depicts a bust of Charles III, facing to the right, wearing armor and the Order of the Golden Fleece. The exact translation of the legend is unclear because the majority of it contains unknown abbreviations. Possibly, the legend states, “They happily proclaim and triumph in Charles III, as Emperor.” Reverse displays four lines, intending to be rays of light, coming from a rock that supports a chalice and waver. The legend possibly translates, “The Church at Guanaxato rejoicing in the faith declares its true allegiance to King Charles.” The literal translation of both legends is unknown because of various abbreviations.