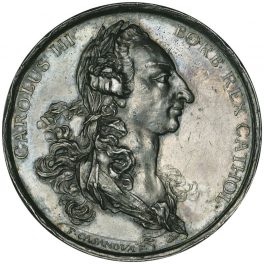 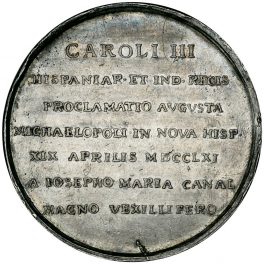 This medal proclaims Charles III as ruler over San Miguel. Obverse depicts a bust of Charles III, facing to the right wearing a wild, curly wig, a laurel crown, and draped cloth. The legend translates, “Charles III, Bourbon, Catholic King” and near the exergue is F. Casanova F. for the die-cutter’s name. The reverse lacks a picture and merely translates, “August Proclamation of Charles III, King of Spain and the Indies, at San Miguel April 19, 1761, by Joseph Maria Canales, Grand Standard Bearer.”