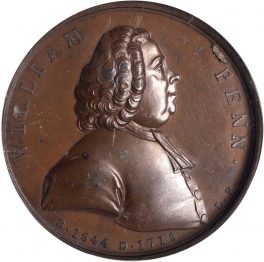 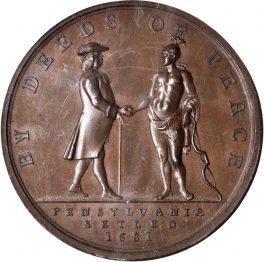 History, Information, and Value of 1775 William Penn by Deeds of Peace Medal

Value of 1775 William Penn by Deeds of Peace Medal

William Penn settled Pennsylvania in 1681 and his goodwill towards the Indians is celebrated with this medal. Obverse features a bust of Penn, facing to the right wearing a simple coat with no collar and a cravat. The legend reads, “William Penn. Born 1644, Died, 1718” and to the right are the initials “L.P. for Lewis Pingo the Chief Engraver at the Royal Mint in London. Reverse displays a Friend shaking hands with an Indian. The legend reads, “By deeds of peace” and in exergue, “Pensylvania [sic] setled [sic] 1681.”