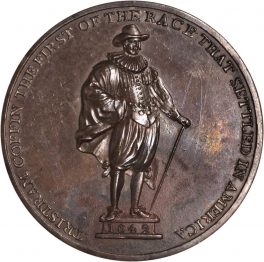 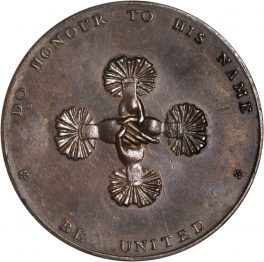 Tristram Coffin moved from Britain to Nantucket where he led a settlement and was known for his excellent leadership skills. Obverse of this medal depicts a full-length figure of Coffin standing forwards wearing a doublet, coat, ruff, and hat and holding a staff in his left hand. He stands on a pedestal inscribed 1642. The legend reads, “Tristram Coffin the first of the race that settled in America.” The reverse displays four hands together. The legend reads, “Do honor to his name. Be united.”

The obverse and reverse text read as follows: Tristram Coffin the First of the Race that Settled in America | and | Do Honor to His Name. Be United..