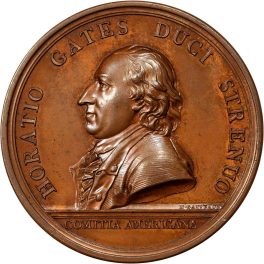 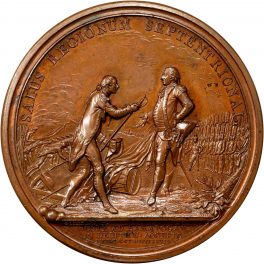 History, Information, and Value of 1777 Horatio Gates at Saratoga Medal

This rare medal originated from a die that belonged to the Comitia Americana series that were engraved in France after the Revolutionary War. The obverse depicts General Gates, facing to the left wearing a military jacket. The legend reads, “The American Congress to Horatio Gates, the valiant Commander.” The reverse legend reads, “The safety of the Northern Regions secured by the surrender of the enemy received at Saratoga, Oct. 17, 1777.” The image on the reverse depicts General Burgoyne surrendering his sword to Gates. Behind the men are soldiers and an olive branch. The artist’s signature is visible in the bottom left.