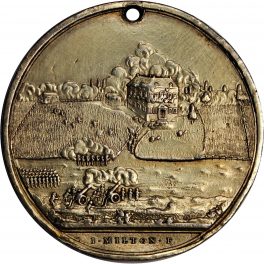 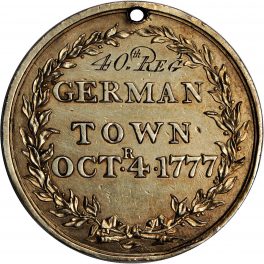 History, Information, and Value of 1785 Battle of Germantown Medal

Value of 1785 Battle of Germantown Medal

The Battle of Germantown, in Pennsylvania took place on 1777. Obverse of the medal displays a laurel wreath encircling the phrase, “German Town Octr 4. 1777.” The reverse lacks a legend but displays an image of the battle at the Chew house. In the foreground are soldiers, firing the cannons and to the left are lines of troops. In the exergue is the artist’s name, J. Milton F. Some variations of this medal feature “40th Reg.” above the word “Germantown” on the obverse and on the reverse a variation with “Reward of Merit” above the house.