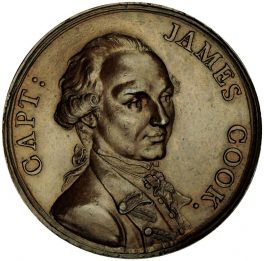 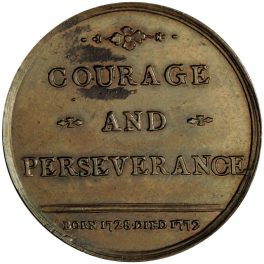 Known for his skills as a navigator, cartographer, and for his position in the Royal Navy as a captain, James Cook was also one of the greatest explorers of his day. This medal celebrates his accomplishments upon his death by natives in Hawaii. Obverse features a bust of Cook, facing to the right, wearing the uniform of the navy, which consists of a jacket, cravat, and a wig tied back. The legend states, “Capt. James Cook”. The reverse legend states, “Courage and perseverance” and in exergue, “born 1728, died 1779.” A rose tops the medal.