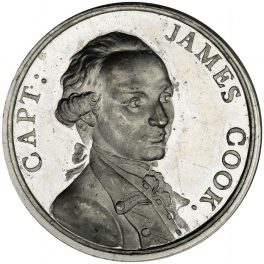 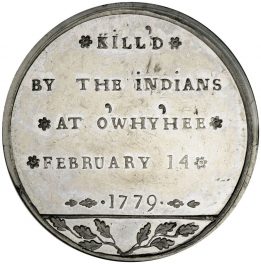 Known for his skills as a navigator, cartographer, and for his position in the Royal Navy as a captain, James Cook was also one of the greatest explorers of his day. This medal celebrates his accomplishments upon his death by natives in Hawaii. Obverse features a bust of Cook, facing to the right, wearing the uniform of the navy, which consists of a jacket, cravat, and a wig tied back. The legend states, “Capt. James Cook”. The reverse legend states, “Kill’d by the Indians at O’Why’Hee, February 14, 1779.” The first, third, and fourth line have rosettes on either side and at the base of the medal are two oak branches with four leaves per side.