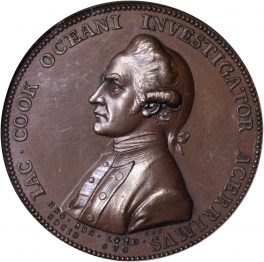 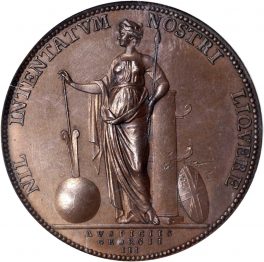 Known for his skills as a navigator, cartographer, and for his position in the Royal Navy as a captain, James Cook was also one of the greatest explorers of his day. This medal celebrates his accomplishments. Obverse features a bust of Cook, facing to the left, wearing the uniform of the navy, which consists of a jacket, cravat, and a wig tied back. The legend states, “James Cook, the most ardent explorer of the Ocean” and below the bust states, “The Royal Society, London to their Fellow”. The artist’s signature is visible to the right of the shoulder, L.P.F. for Lewis Pingo. The reverse displays Fortune, standing against a column holding a rudder, which stands on a globe. An oval shield with British crosses leans against the far right of the column. The legend states, “Our [associates] leave nothing untried” and in exergue, “Under the auspices of George III.”