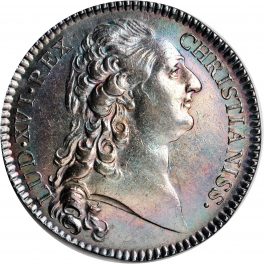 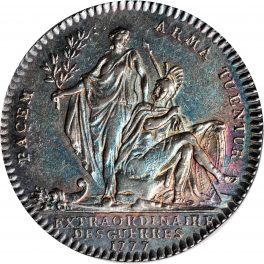 Sources believe the French possibly issued this medal before they entered into the Revolutionary War. The obverse displays a nude bust of Louis, facing to the right, his hair curling below his shoulders. The legend reads, “Louis XVI, Most Christian King.” The reverse legend states, “Arms preserve peace” and in exergue the translation refers to this medal being a special issue from the War Department. The image on the reverse displays Mars on the right with a spear and sword and Peace to his left with one of her hands on his shoulder and the other hand pointing him away.