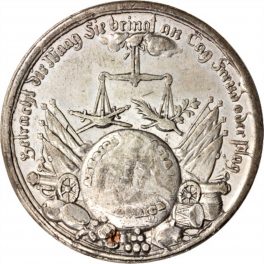 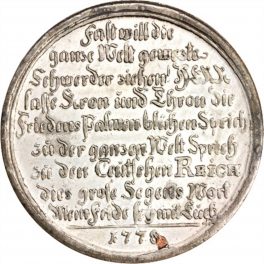 History, Information, and Value of 1778 German Prayers for Peace Medal

This rare German peace medal was struck after the French agreed to help the United States during the Revolutionary War in 1778. The reverse translates, “Consider the balance, it brings each day joy or trouble” Depicted is a scale near the top over a globe which is surrounded by trophies of way. The reverse legend translates, “Nearly the whole world have whet their swords! O Lord, let Crown and Throne blossom with palms of peace. Speak Thou to all the world- speak Thou to the German Empire this great word of blessing, My Peace be with you. 1778.” There is no image on the reverse.