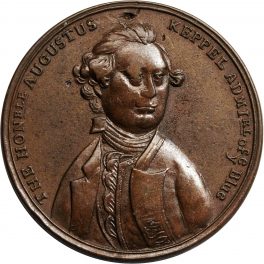 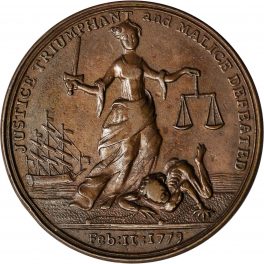 This medal celebrates the acquittal of Admiral Augustus Keppel after being accused of neglect of duty and trial by Court Martial for an action off Ushant in 1778. Obverse features a bust of the Admiral, three-quarters to the right, wearing a coat and hat. The legend reads, “The Honorable Augustus Keppel Admiral of the Blue.” The reverse displays Justice stepping on Malice. Justice carries a sword in her right and scales in her left hand. In the background is a ship. The reverse legend reads, “Justice triumphant and malice defeated.”

The obverse and reverse text read as follows: The Honeble Augustus Keppel of EY Blue | and | Justice Triumphand; Malice Defeated.