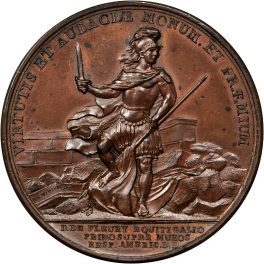 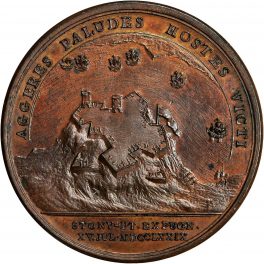 History, Information, and Value of 1779 DeFleury at Stony Point Medal

This American medal celebrated the American victory at Stony Point, New York and commemorated M. de Fleury, a French officer who was one of the first men to scale the walls of the fort before his head. The obverse features a full-length figure of de Fleury, facing three-quarters to the right and wearing ancient armor, a cloak, and carrying a sword and flag. He stands in the ruins of the fort, victorious. The legend states, “A monument and reward of valor and bravery; to M. de Fleury, a French Officer, the first to mount the walls, the American Republic presented this gift [dono dedit].” The reverse displays and aerial view of the battle, with six ships sailing outside the fort. The legend translates, “Fortifications, marshes, and enemies overcome. Stony Point taken by storm, July 15, 1779.”