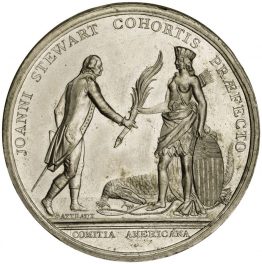 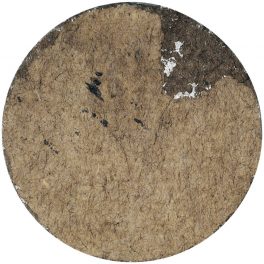 This American medal celebrated the American victory at Stony Point, New York and commemorated Major John Stewart who led 100 volunteers against the British defense. Obverse of the medal features an Indian Queen, standing at the right of the medal, holding out a palm branch, while supporting an American shield at her side. At her feet is an alligator and on her back is a quiver of arrows. To the left is Major Stewart wearing his uniform as he grasps the palm branches with his right and beneath his feet is the artist’s signature, Gatteaux. The legend reads, “The American Congress to John Stewart, Commander of the [storming] party.” The reverse displays the assault, as Stewart, who holds a sword in his hands, leads up the troops in the foreground to the fort. The legend reads, “Stony Point assaulted, July 15, 1779.”