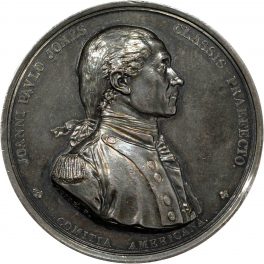 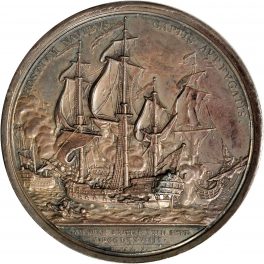 History, Information, and Value of 1779 John Paul Jones and Serapis vs Bonhomme Richard

Value of 1779 John Paul Jones and Serapis vs Bonhomme Richard

This early American Medal is ranked #35 out of 100 Great American Medals and Tokens and celebrates John Paul Jones. The obverse features a bust of Jones, facing to the right, wearing his naval uniform and his hair tied back with a ribbon. The legend translates, “The American Congresss to John Paul Jones, Commander of the fleet” and on the truncation, the artist’s name, Dupre F. The reverse displays a naval combat featuring three ships, one American in the forefront against two British ships. In the water near the American ships, are several sailors in the water, holding on to a spar for safety. The legend reads, “The ships of the enemy captured or put to flight on the shores of Scotland, Sept. 23, 1779” and at the very base the artist’s signature, Dupre. F.