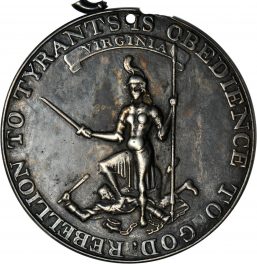 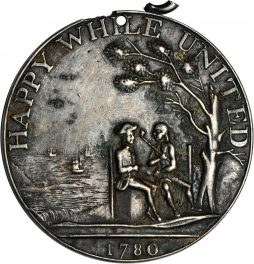 History, Information, and Value of 1780 Virginia Happy While United Medal

Thomas Jefferson ordered this rare Indian medal while Governor of Virginia. The obverse features the arms of Virginia. A woman wearing armor with a sword in her right and a spear in her left stands atop the prostrate body of a man. Near the man on the ground lies a crown. The legend reads, “Rebellion to tyrants is obedience to God.” The reverse displays an Indian and an officer sitting under a tree while in the distance is the ocean and three boats. The Indian holds out a pipe to the officer. The legend reads, “Happy while united” and in exergue the year, 1780. A loop at the top of the medal is fashioned out of a pipe and eagle’s wing. This medal is very rare in both copper and pewter and only one known silver medal is in existence today.

The obverse and reverse text read as follows: Rebellion To Tyrants is Obedience To God | and | Happy While United, 1780.