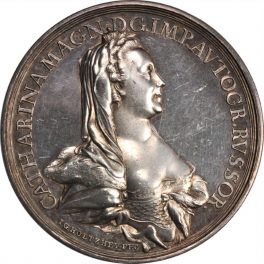 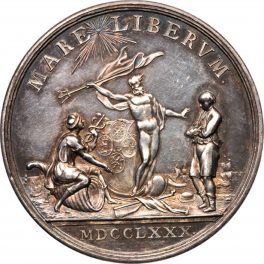 History, Information, and Value of 1780 Catherine the Great and Armed Neutrality Medal

Value of 1780 Catherine the Great and Armed Neutrality Medal

Russian, Denmark, Sweden, and Holland as a pledge to aid the American Colonies against the British signed the Treaty of Armed Neutrality, which this medal commemorates. The obverse of this medal features Catherine, Queen of Russia, facing to the right wearing a low-necked dress and veil. The legend around her reads, “Catharine the Great, by the grace of God, Empress and Autocrat of all Russia” and below her shoulder is the artist’s signature, I. G. Holtzhey Fec. The reverse displays Neptune, holding his trident over his head, standing in a shell which bears a shield that displays arms of four countries that signed for armed neutrality: the double-headed eagle of Russia, the three crowns of Sweden, Three crowned lions of Denmark, and a lion with arrows for Holland. To the right of Neptune stands a sailor, arms crossed and looking down at the ground. To the left sits Mercury, resting on a cornucopia and pointing at the rudder in the foreground. At the top of the medal blazes a new star, which stands for America. The legend reads, “A free ocean”.