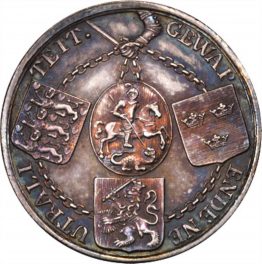 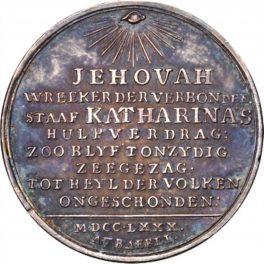 History, Information, and Value of 1780 Treaty of Armed Neutrality Medal

Russian, Denmark, Sweden, and Holland as a pledge to aid the American Colonies against the British signed the Treaty of Armed Neutrality, which this medal commemorates. The obverse of this medal features an arm, clad in mail, which holds up four shields connected by a chain, which stand for the four countries that signed the treaty. The round, central shield features St. George and the Dragon, the arms for Russian. To the right are three crowns on a square shield for Sweden, at the bottom is a square shield with a crown lion and arrows for Holland, and to the left are three crowned lions laying down, which represent Denmark. The legend reads, “Armed Neutrality”. The reverse bears the All-Seeing Eye at the top of the medal. The eight-lined inscription translates, “Jehovah, the Avenger of Treaties, confirms Catherine’s Treaty of assistance, so that the commerce of the neutral powers remains intact for the benefit of their people. 1780. A. V. Baerll”.