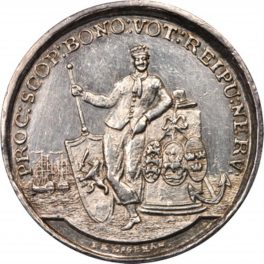 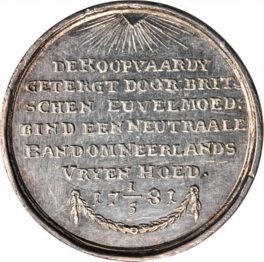 History, Information, and Value of 1780 Treaty of Armed Neutrality Medal

Russian, Denmark, Sweden, and Holland as a pledge to aid the American Colonies against the British signed the Treaty of Armed Neutrality, which this medal commemorates. The obverse of this medal features a sailor, wearing a crown and holding a rudder topped by a lion as he leans against a column. At the top of the column is the hat of the Netherlands, at the base an anchor, and hanging from the column are three shields, which represent Sweden, Denmark and Russia. In the distance behind the sailor, are two ships sailing away. The legend reads, “The aim of Princes, the desire of good men, the life of the republic.” The reverse reads, beneath the All-Seeing Eye, “The merchant trade provoked by British arrogance, binds a neutral band around the free hat of the Netherlands, January 5, 1781.”