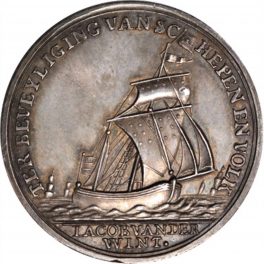 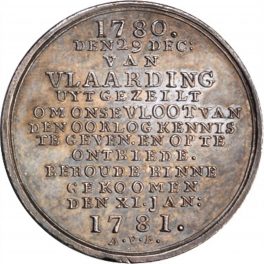 History, Information, and Value of 1781 Escape of the Dutch Fishing Fleet Medal

Value of 1781 Escape of the Dutch Fishing Fleet Medal

On December 20,1780, England declared war on Holland and eight days later, Van der Wint sailed out to collect the Dutch fishing fleet to rescue them from the British. This medal commemorates the Dutch success against the English. Obverse features a small cutter sailing to the left. The legend reads, “For the safety of ships and the people – Jacob Van der Wint.” The reverse legend states, “Dec. 29, 1780, sailed from Vlaarding in order to communicate the state of war to the fleet, and to recall the same; safely returned Jan. 11, 1781.”