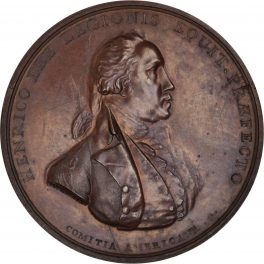 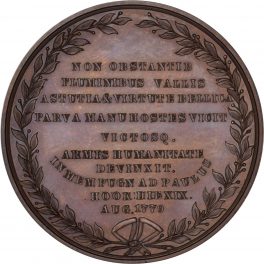 Henry Lee, or “Light Horse Harry” commanded the first Legion of Cavalry in the Revolutionary Army and distinguished himself in several battles. This medal commemorates his victory over the British upon the capture of Paulus Hook, or Jersey City. Obverse features a bust of Lee, facing to the right wearing his military uniform. Under the truncation is the artist’s signature, J. Wright and the legend reads, “The American Congress to Henry Lee, commanding a battalion of cavalry.” The reverse contains an inscription within a laurel wreath, which reads, “Notwithstanding rivers and ramparts, with a small band of men he conquered the enemy by his sagacity and valor, and bound to him by his humanity those whom he had overcome by arms.”