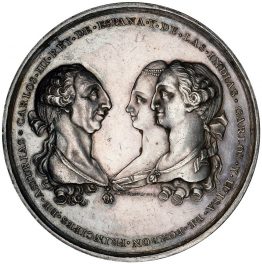 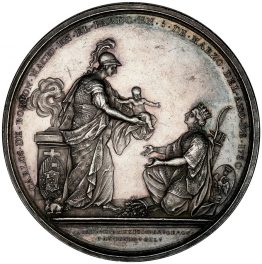 This medal celebrates the birth of the Spanish Prince Charles. The obverse features an image of Charles III, facing to the right, undraped, wearing the Order of the Golden Fleece. Facing Charles is an image of the Prince and Princess of Asturias, conjoined and facing to the left. The legend reads, “Charles III, King of Spain and the Indies. Charles and Louisa of Bourbon, Princes of Asturias. Jerome A. Gil [Die-Cutter].” The reverse displays an Indian Queen, in traditional dress reaching both hands out to an infant held by Spain. Spain wears a helmet and cloth embroidered with lions and castles, at her feet is a rabbit and behind her is a shield and a burning altar. The legend reads, “Charles of Bourbon, born in âEl Pardo,’ March 5, of the year 1780: engraved in Mexico by Jerome Anthony Gil.”