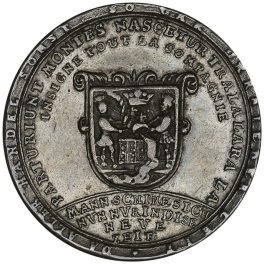 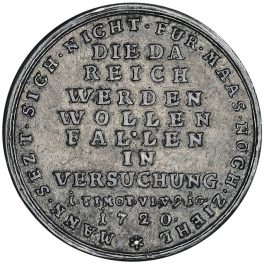 This medal warns against the convincing verbiage of John Law as he attempted to sell nefarious schemes. Law’s company maintained a monopoly on businesses in the French colonies, which stretched from North America to the West Indies. Law’s exaggeration of wealth in the New World led to speculation and the eventual bursting of the bubble in 1720. Obverse, this medal pictures John Law’s Company Arms which is a shield upon which the hold of plenty, held by two individuals, is dripping with gold. Around the image is written, “The mountains are in labor; [Nothing but a sound], is born. The emblem [or arms] of the entire company.” The exergue states, “A man can do nothing under present circumstances but go with the times.” Reverse is written, “They that will be rich will fall into temptation. 1 Tim 6:9, 10. 1720.”