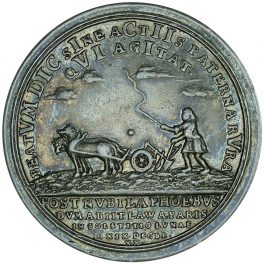 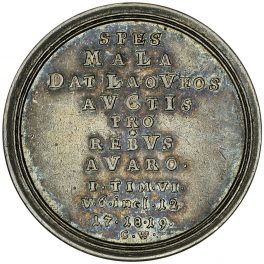 This medal warns against the convincing verbiage of John Law. Obverse of this medal pictures a ploughman, swinging his whip as he drives two horses to the left. Around the image states, “Call him happy who cultivates his paternal fields without shares.” In exergue, “The sun appeared from behind the clouds while Law went away from Paris on the winter solstice of the moon, Dec 19, 20, 1721.” Reverse is written, “An evil hope proves a snare instead of increased riches, to an avaricious man. 1 Timothy, Chap vi, verse 6, 12.” The “C.W.” at the end stands for Christian Wemuth the engraver of the piece.