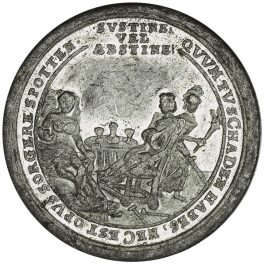 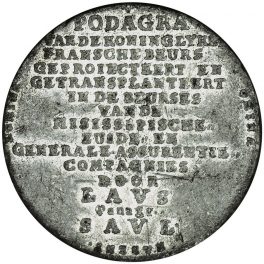 This medal warns against the convincing verbiage of John Law. Obverse of this medal pictures an invalid in a chair his arms folded and facing to the left where a woman is laying a crown on her head. Between them is a table with two glasses. Behind the invalid is fury walking to the right with a torch in her left and sword in her right. Around the scene translated, “Since you have met with the loss, there is no need to worry over ridicule; Sustain or abstain.” It is believed that the crippled individual reverses to the crippled French finances of the era. The woman, stripped of everything is France, and the Fury is the ridiculous ventures that Law proposes. Reverse is written, “The gout of the Royal French Treasury injected and transplanted into the treasures of the Mississippi, the South, and the General Assurance Companies, by the Law, Manager.”

But of John Law Medal