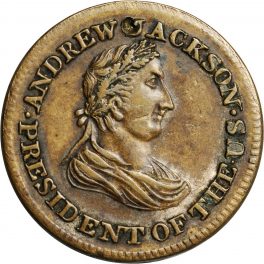 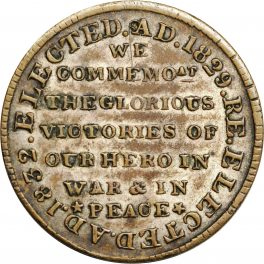 This well designed token features Andrew Jackson wearing a toga. Although, it can be hard to identify the man to someone who isn’t familiar with United States Presidents. The Roman man wearing a toga is in fact Jackson, though. The coin comes in two different metals, both Copper and Brass. On the rarity scale, these are very low and common. A typical grade would range from VF to AU, with the latter being more expensive. This token typically receives the Hard Times Designation of HT-6.