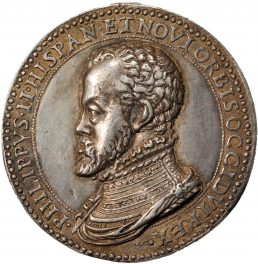 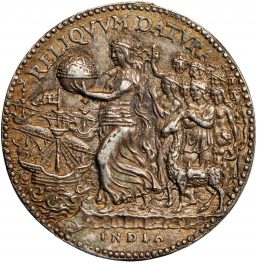 History, Information, and Value of 1581 Spanish Commerce in the West Indies Medal

Value of 1581 Spanish Commerce in the West Indies Medal

This detailed medal symbolizes Spanish commerce in the East Indies. The front of the medal portrays a bust of Philip II, in his armor, facing to the left. His Latin title translates to, “Philip II, King of Spain and of the New World”. The back of the medal details the goddess Commerce holding a globe, while facing three ships. Behind Commerce are eleven natives and a detailed lama. The exergue reads “India” and the obverse not signed by the artist. The translation of the Latin on the reverse is, “India, about to give the remainder”, explaining the actions being taken by the natives pictured.