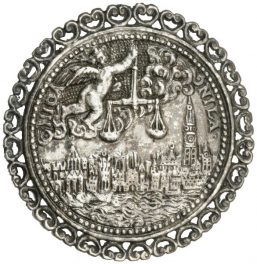 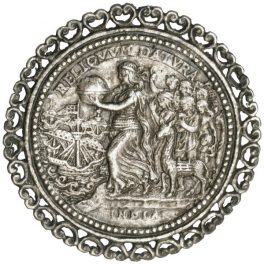 History, Information, and Value of 1581 Spanish Conquest of the Entire Portugese Kingdom Medal

Value of 1581 Spanish Conquest of the Entire Portugese Kingdom Medal

This is one of the two rare medals that were struck to commemorate the Spanish conquest of Portugal and the Portuguese New World territories. The front of the medal proclaims Philip II as King of Spain and of the New World. Unlike previous coins, this piece has Philip facing at three-quarters to the right. He is wearing a ruff, cloak, and hat. The back of the coin proclaims that “One World is Not Enough” and features a horse jumping from the globe which is representative of earth. This medal displays Spanish assets gained from the Portuguese.