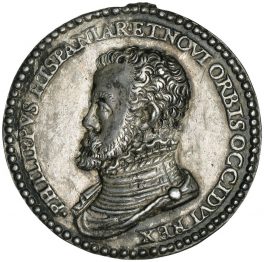 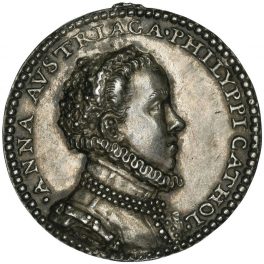 History, Information, and Value of 1570 Marriage of Philip and Anne Commemorative Medal

Value of 1570 Marriage of Philip and Anne Commemorative Medal

This semi-rare medal is one of two commemorative medals celebrating the marriage of Philip to Anne of Austria. The couple was married in 1570 and Anne gave Philip five children. This coin may or may not have a loop at the top. While unsigned, this detailed medal shows Philip on the front, in a high fitted neck of armor facing left. His title, inscribed in Latin, circles the coin and translates to, “Philip, King of Spain and of the Western World.” The reverse shows his young wife Anne, facing right. She is wearing a detailed ruff and an exquisite set of pearls around her neck. Her hair is coiffed and on her arm is her age, only 21. Her title, also in Latin, translates to “Anne of Austria, wife of Philip the Catholic”. The coin itself has beaded sides and along the edge is a delicate pattern. While undated, the couple married in 1570 and thus the date of the medal is known.