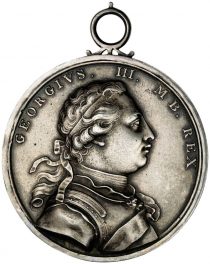 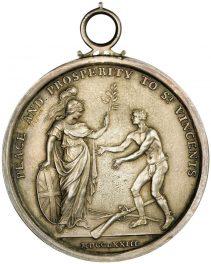 This medal commemorates the suppression of a rebellion at St. Vincent. Obverse features a bust of King George III, facing to the right wearing ribbon, armor, and a wig tied back in a bow. The legend around his head states, “George III, King of Great Britain.” Reverse depicts a Britannia standing on the left, wearing draped cloth, holding a shield which bears the British crosses and extending her left hand which holds an olive branch. To the right is a half-naked man, apparently a Caribbean native who reaches out both hands to accept the olive branch. At his feet is a musket. The legend reads, “Peace and Prosperity to St. Vincent, 1773.”