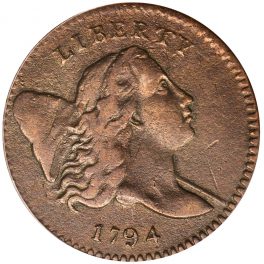 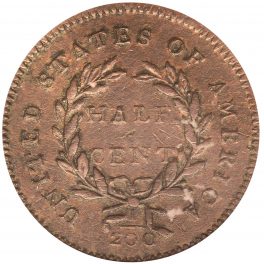 History, Information, and Value of 1794 Liberty Cap Half Cent

Whitman-1a and b | Cohen-1a and b, Breen-1a and b | Breen dies: 1-A. | W-1a and W-1b represent differences in edge lettering with W-1a the Large Letters and W-1b the Small Letters designation; this is also the case in several of the following varieties. There is a great difference in rarity between W-1a and W-1b, with perhaps 350 to 500 examples known of the former but with just 25 to 30 or so examples known of the latter. However, the market price differential on the 1794 Liberty Cap Half Cent, W-1a and W-1b does not reflect this, as collecting edge lettering by size is a sub specialty that would not affect the worth. The date is low and repunched on the obverse and there are 15 leaves and four berries on each wreath stem on the reverse of this Philadelphia Mint coin. 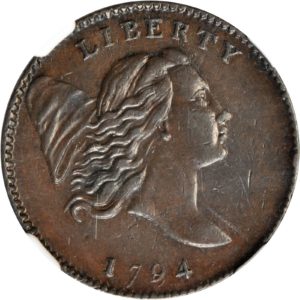 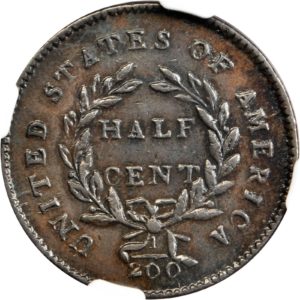 W-2a and b | C-2a and b, B-2a and b | Breen dies: 2-B. | As with its W-1a and W-1b counterparts, there is a substantial difference in rarity between W-2a and W-2b, though here the “a” designation is the rarer of the pair, and can be worth more. Perhaps just 15 to 20 examples of W-2a can be found today, many of those in low grade, while the W-2b combination fields some 400 to 700 pieces. The 1794 Liberty Cap Half Cent, W-2a and W-2b sometimes exhibits bold clash marks around Liberty’s portrait in the form of reverse wreath details. The date is closely spaced on this variety with the 1 under Liberty’s shoulder but not her hair. 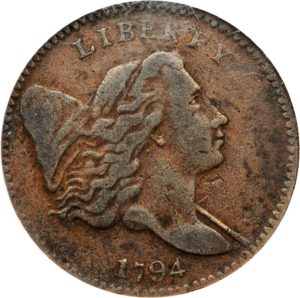 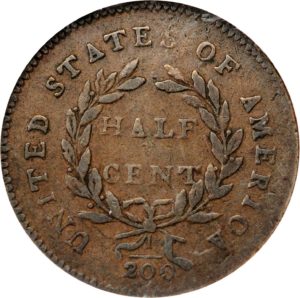 W-5a and b | C-3a and b, B-5a and b | Breen dies: 3-E. | Another rare variety of the 1794 Liberty Cap Half Cent, W-5a and W-5b, the W-5a designation is represented by fewer than 10 specimens though a pleasing AU example is among that short list. W-5b has a somewhat larger population of 55 to 70 or so pieces and is still a great scarcity in its own right; VF is the highest grade known for this variety. The obverse die is that of the preceding variety, and though the reverse die also features 14 leaves left and 18 leaves right (see W-4 above), the die is totally different from that of W-4; here the uppermost leaves of the wreath touch. 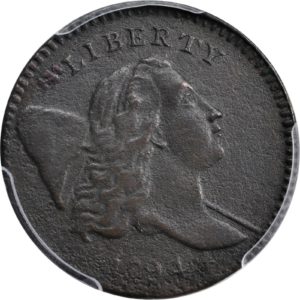 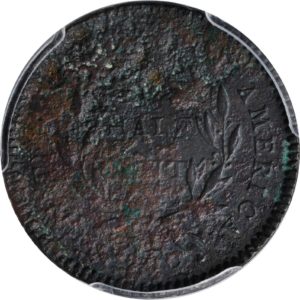 W-6a and b | C-4a and b, B-6a and b | Breen dies: 4-E. | The reverse die of 1794 Liberty Cap Half Cent, W-6a and 6b is that of the preceding variety. The W-6a with Large Edge Letters is a rare prize with perhaps only a dozen or so specimens in any grade and with a Fine example the best of those currently known. The W-6b designation is known to the extent of 900 to 1,100 pieces and is considered the most readily available variety of the year, making them worth less than one of the coins that only had a production run of a few hundred. 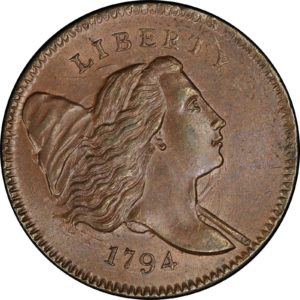 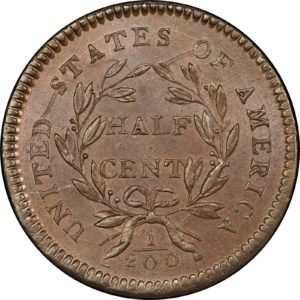 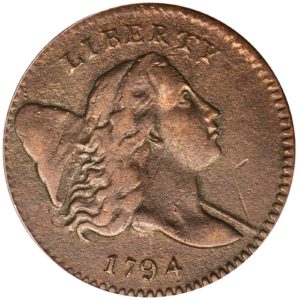 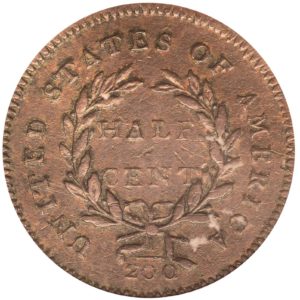 W-4a and b | C-6, B-4a and b | Breen dies: 3-D. | Another rare variety of the date, 1794 Liberty Cap Half Cent, W-4a and W-4b follow the Large Letters- Small Letters pattern of the previous varieties. The obverse is the same die as the preceding variety, but here the reverse wreath has leaves distributed 14 left and 18 right. W-4a is a great rarity and is represented by but a single specimen, that variously called “VG, cleaned” or “Fine.” Its first appearance is believed to be in the 1960 Kosoff sale of the Lehrman Collection, lot 50; its unique status still stands today. W-4b is no slacker in the rarity department either with just 30 to 40 or so examples known in all grades up to EF; beyond that it, too, is a major rarity. 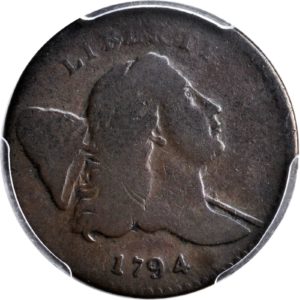 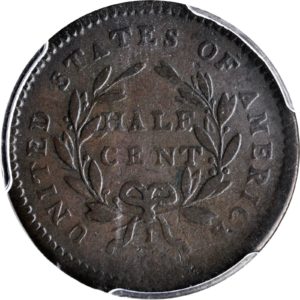 W-7 | High Relief Head | C-7, B-7 | Breen dies: 5-D. | The 1794 Liberty Cap Half Cent, W-7 features the first use of the High Relief Head style. It is thought that only 35 to 50 examples of this rare variety can be accounted for today. Remarkably, two examples are known in Mint State, one of which is permanently impounded in the British Museum. Usually found in low grades when found at all, W-7 presents a challenge to today’s half cent collectors. The reverse die, 14 leaves left and 18 right, was used at W-4. 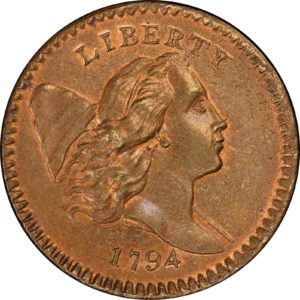 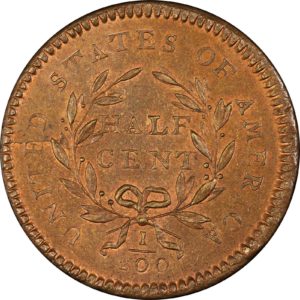 W-8 | High Relief Head | C-8, B-8| Breen dies: 5-C. | The 1794 Liberty Cap Half Cent, W-8 features the same obverse die as the preceding variety and the same reverse die as W-3, along with small edge lettering. Typically found in lower grades though an EF is known. At EF the variety is far rarer than its suggested population of 45 to 60 pieces lets on, and a newly discovered EF example would be counted today as a great numismatic find. 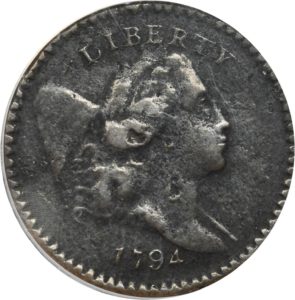 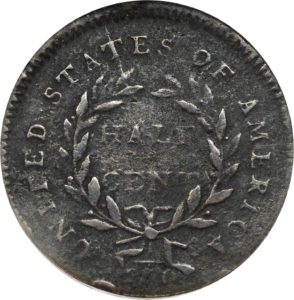 W-9 | High Relief Head | C-9, B-9 | Breen dies: 5-B. | From the same obverse die as the preceding variety and the same reverse die as W-4. Though some 700 to 900 examples of the 1794 Liberty Cap Half Cent, W-9 are known in all grades — making this the second most available variety of the date –an AU or finer specimen can be considered rare. Of the handful of Mint State 1794 half cents in collectors’ hands today, this variety represents most of the known examples. 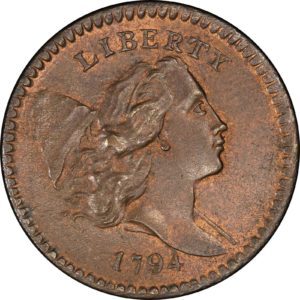 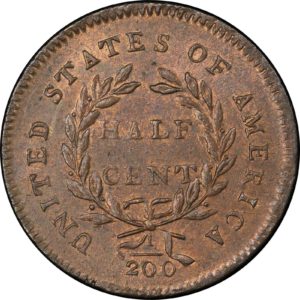 Value of 1793 Liberty Cap Half Cent

Value of 1795 Liberty Cap Half Cent