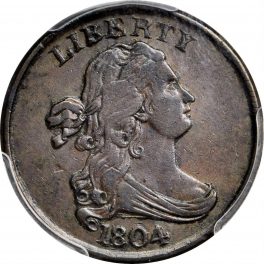 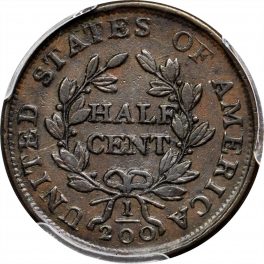 History, Information, and Value of 1804 Draped Bust Half Cent 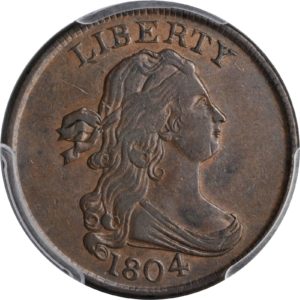 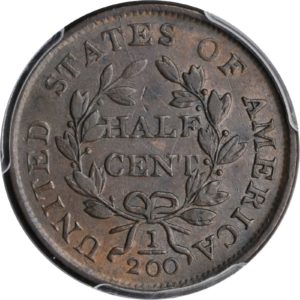 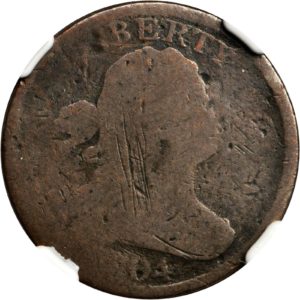 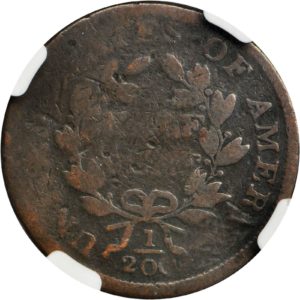 W-2a | Crosslet 4 / Stems to Wreath | C-delisted, B-4 | Breen dies: 1-B. This is an earlier die state of the next-listed variety. | Something on the order of 12 to 15 examples of this rare die state are known, the finest just VG in quality. It shares the obverse of W-1 and has the same berry count on the reverse as that variety though the lettering is differently aligned with the leaves than on W-1. 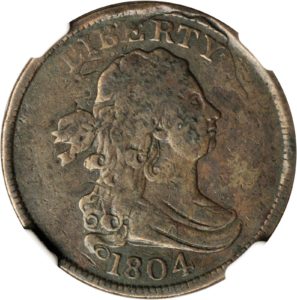 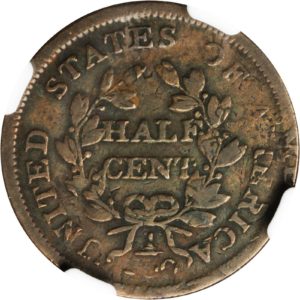 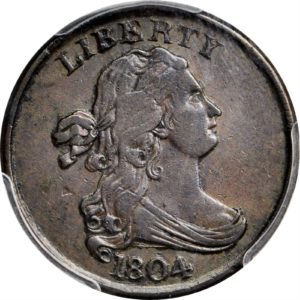 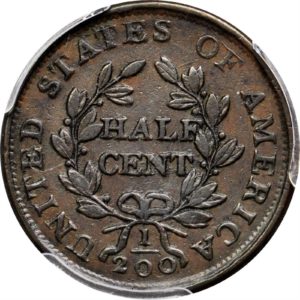 W-2b | Later die state of the above | Crosslet 4 “Spiked Chin” / Stems to Wreath | C-5, B-4a | Breen dies: 1a-B. The “spike” was caused by the slip of an engraving tool. | Perhaps the most famous of all half cent varieties, the “Spiked Chin” occurred from an engraver’s slip at the chin that left a protruding spike or thorn, and a loose portion of a press screw that defaced the die during use. From the same dies as the preceding though the reverse die of W-2b shatters in a later state. Perhaps 150 to 250 examples can be accounted for today, mostly in grades of VF or lower. 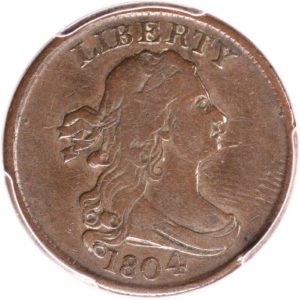 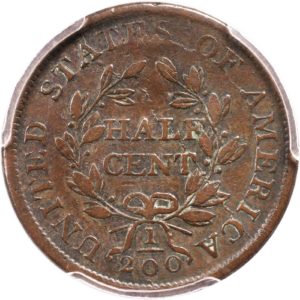 W-4 | Crosslet 4 “Spiked Chin” / Stems to Wreath | C-6, B-6 | Breen dies: 1a-D. | W-4 is the second most plentiful of the four “Spiked Chin” varieties with perhaps 1,200 to 1,500 examples known in all grades. A few Mint State examples exist but they are rare and mostly locked away in advanced half cent cabinets. Same obverse die as the preceding but with a similar reverse _ five berries to each side _ that differs slightly in the placement of the surrounding letters. 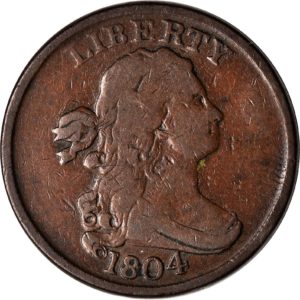 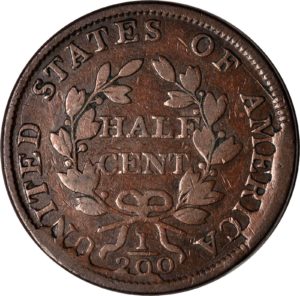 W-3 | Crosslet 4 “Spiked Chin” / Stems to Wreath | C-7, B-5 | Breen dies: 1a-C. | The second of four 1804 half cent varieties with the “Spiked Chin” designation, W-3 has an estimated population of just 125 to 175 or so pieces with high-grade specimens above VF rare and elusive. From the same obverse die as W-2 but from a different reverse die, berries five left and five right but in a different relationship to the lettering. 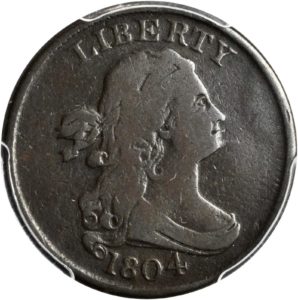 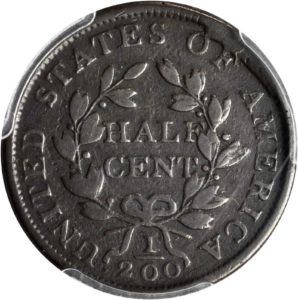 W-5 | Crosslet 4 “Spiked Chin” / Stems to Wreath | C-8, B-7 | Breen dies: 1a-E. | W-5 is the most available of any of the “Spiked Chin” varieties with an estimated population of 2,200 to 3,000 or so coins, a figure that is concentrated in the lower grade range some Mint State coins are known. Same obverse die as preceding, reverse similar but with a difference of lettering placement; the second A of AMERICA virtually touches the ribbon. 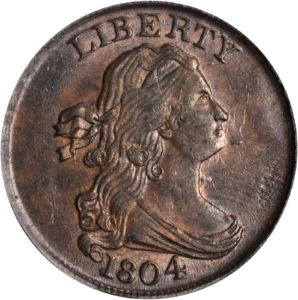 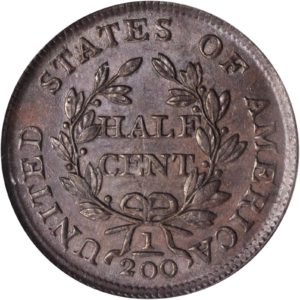 W-8 | Crosslet 4 / Stems to Wreath | C-9, B-8 | Breen dies: 3-E. | W-8 is a plentiful variety with perhaps 1,200 to 1,700 or so pieces available to today’s collecting community. Grades run from AG up to Mint State, though the latter are rare and seldom offered; the majority of survivors are in the VF range. Obverse die with widely spaced date numerals, reverse die the same as W-6. 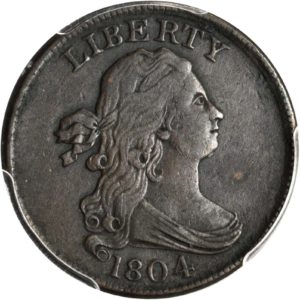 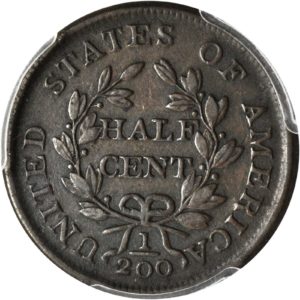 W-9 | Crosslet 4 / Stems to Wreath | C-10, B-9 | Breen dies: 4-E. | Another readily available variety with something on the order of 2,000 to 3,500 pieces extant. Mint State half cents of the date appear with some regularity for W-9, making it one of the few varieties of the date about which this can be said. 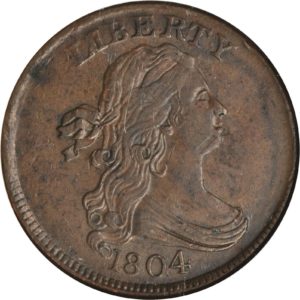 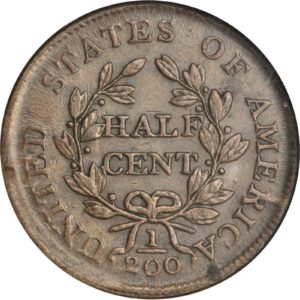 W-12 | Plain 4 / Stems to Wreath | C-11, B-12 | Breen dies: 5-G. | Of the dozen 1804 half cent varieties, the W-12 die combination is somewhat elusive with only 500 to 750 pieces known in all grades. The largest concentration of the variety is found at the lower end of the grading spectrum and examples above VF are highly elusive. Known in Mint State, but extremely rare and mostly found in advanced half cent collections in that designation. 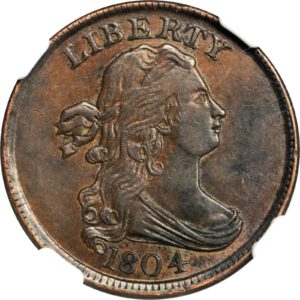 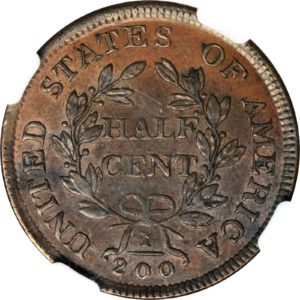 W-10 | Crosslet 4 / Stemless Wreath | C-12, B-11 | Breen dies: 4-F | The population for W-10 consists of some 1,600 to 2,000 or so pieces in all grades with some Mint State pieces available to those with patience. The obverse die is the same as the preceding while the reverse die is without stems from the wreath and with six berries left and five right among the foliage. This variety was extremely rare in Mint State until circa 1965 when a small hoard may have been released according to Walter Breen’s research. 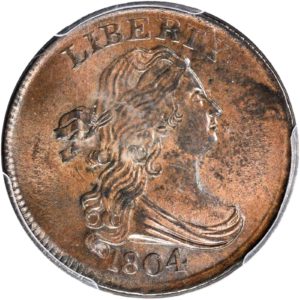 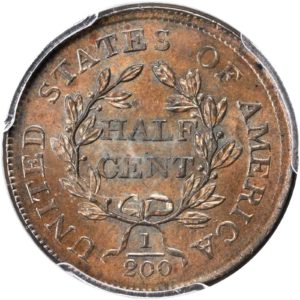 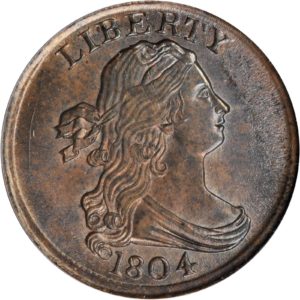 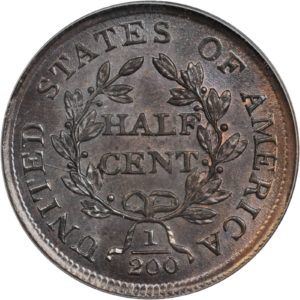 Of the early Copper Half Cents, the Draped Busts are somewhat easy to come by for a low price, or easy to find in a pre-exsisting collection. If you have any questions about which die pair your coin was struck with, or general value questions, please contact our rare coin experts. Our experts will help you identify your coin, as well as determine a value. If you are looking to sell your coin, consider adding it to our rare coin auctions. We are coin buyers!

Value of 1803 Draped Bust Half Cent

Value of 1805 Draped Bust Half Cent