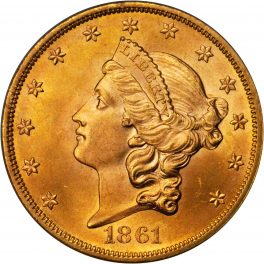 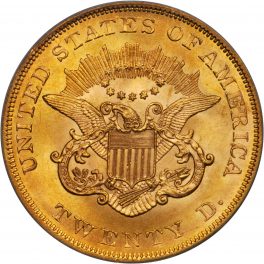 With nearly three million coins produced, the 1861 $20 Double Eagle has the largest mintage from the Philadelphia Mint for any Type 1 double eagle. In late 1861 when the outcome of the Civil War was uncertain, many banks stopped paying out gold coins at par in exchange for paper money. This led to hoarding, which accounts for the survival of 200 or more Mint State coins today. Strike quality is usually sharp, and the luster varies between frosty and satiny, both of which are above-average in eye appeal for the type.
Availability: The 1861 $20 is plentiful in all circulated grades, with an estimated 6,000-8,000 coins available up through Choice AU. Populations diminish slightly in Mint State, though the issue doesnt become truly rare until MS-64 and above. The vast majority of the 66 Proofs that were struck went unsold and were later melted, leaving just five that can be accounted for today.