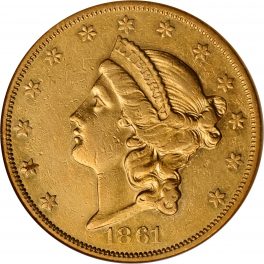 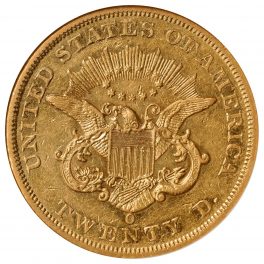 The 1861-O $20 Double Eagle is another good example of a _story coin,” one of several in the series of Type 1 double eagles issued from 1849 to 1866. These were minted under three authorities: 5,000 by the federal government, 9,750 by the State of Louisiana and 2,991 by the Confederate States of America. Most examples are weakly struck across the obverse and exhibit a prooflike reflectivity, though on some examples this reflectivity has been dampened by efforts at conservation or mishandling. A historically significant issue, just 150 to 175 examples are thought to remain in all grades. Most pieces are heavily worn and are encountered in VF to EF condition, with an estimated three dozen AU coins available to collectors. Doug Winter suspects that there are just 3-5 unique Mint State specimens in existence, the finest of which are represented by a pair of NGC-graded MS-62s, though they may be the same coin.